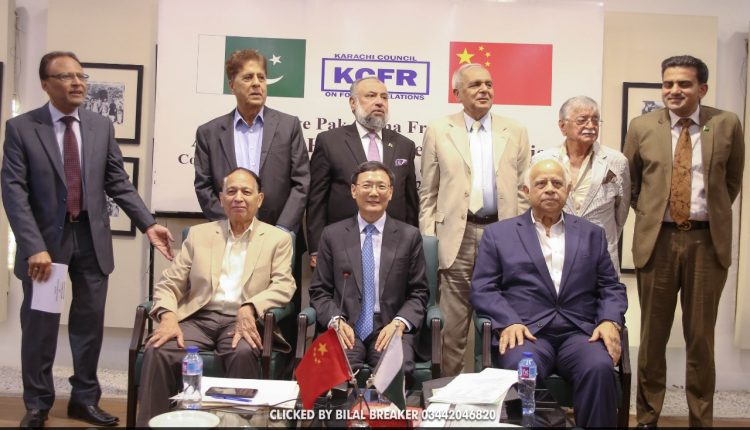 Neelum-Jehlum Powerplant continues to be under repair by Chinese engineers The Consul General of China at Karachi, Mr. Li Bijian, while addressing the Karachi Council on Foreign Relations (KCFR) affirmed China’s commitment to the economic development of Pakistan.

He spoke about China’s key role in overcoming Pakistan’s energy crisis and development of infrastructure under the umbrella of China Pakistan Economic Corridor (CPEC).
He dilated on dimensions of CPEC that included the energy sector Sahiwal Coal Fired Power Project, Engro Thar Coal Project, Quaid-e-Azam Solar Park at Bhalwalpur, Hub Coal Power Project, Coal Fired Power Plant at Port Qasim in Karachi.
In the communication sector under CPEC, he mentioned Karakoram Highway phase 2 project, Multan Sukkur Motorway and Orange Metro Train in Lahore.
He further mentioned construction of Gwadar International Airport and also Coal Power Project in Gwadar. With regard to investments in Pakistan by foreign investors he stated that proper infrastructure and security have to be extended to the potential investors.
The Chairman Admiral Khalid Mir  assured him that unfortunate security incidents are taken care of by the security agencies in Pakistan effectively.
The CG said that the world was going through spectacular changes and the World was seeing emergence of new power blocs.
He further stated that China seeks good relations with all states.
He also spoke about China’s trade with India, despite the disputes over the China-India borders.
He stated that as demonstrated by China, differences in Foreign Policy should not come in the way of commercial and trade relations.
With regard to development of Special Economic Zones in Pakistan under CPEC he cited the example of Dhabeji in Karachi which was visited by Chinese delegations in 2019 and again in 2022, The development of proper infrastructure in Dhabeji needed to be looked into earnestly.
He cited the example of China, where to attract foreign investments China has been extending incentives that included land free of cost, free electricity etc.
The CG stated that unfortunately, there is a false propaganda that China through CPEC investments is creating a debt trap against Pakistan,The false propaganda aims at sabotaging CPEC projects in Pakistan.
In reply to a question that Chinses engineers have stopped repair work in the Neelum-Jhelum Hydro Electric Project, the CG stated that this is a fake news and repair work continues to be executed.
In reply to another question that despite FTA between Pakistan and China there is a huge trade imbalance.
He stated that Pakistan has to explore suitable markets in China and ensure quality products. In reply to another question regarding difficulty in obtaining tourism visas, the CG stated that the issue is related to Covid and terrorism concerns.
However, if KCFR members are desirous of obtaining tourism visas, the CG office will assist in obtaining the requisite visas.
Concluding the session, the Chairman KCFR Admiral Khalid Mir thanked the CG for sparing his valuable time by visiting and interacting with the members of KCFR.
He assured him that unfortunate security incidents taken place, will be taken care of by the security agencies in Pakistan effectively.
He was of the view that the excellent Pak-China relations in all fields will continue and in fact will improve with the passage of time.
89
Share FacebookTwitterGoogle+ReddItWhatsAppPinterestEmail

Bilal Zafar Solangi is a Freelance Journalist, Human Rights & Tobacco Control Activist. Alumni of John Hopkins School of Public Health. Done Masters in Mass Communication. He writes on the social issues of society.
You can reach him at :bzsolangi@gmail.com, Twitter : @bzsolangi

Education For All: A Plan To Support Needy Students For Education