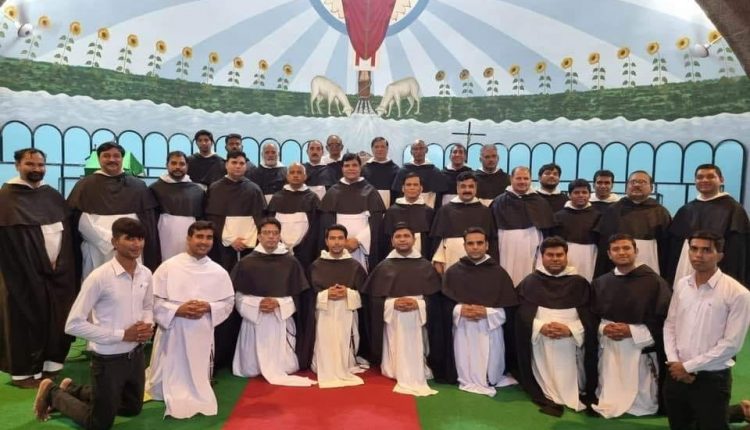 This year, the Dominican order (Order of Preachers) celebrates the 800th death anniversary of the its founder, St. Dominic, who died in Bologna on 6 August, 1221. The theme of the anniversary which the congregation marks from 6 January 2021 to 6 January 2022 is “At Table with St. Dominic.” It is inspired by the Mascarella table, the table on which the first portrait of the saint was painted shortly after his canonization.

Along with whole Dominican Order, Pakistani Dominicans also celebrates 800th years death anniversary of St. Dominic during their Mid-Term Assembly 26-29, September 2021 at Holy Rosary Parish Warispura, Faisalabad and many other on-going celebrations all over Pakistan.

Fr. Younas Shahzad OP (Prior Vice Provincial of Ibn-e-Mariam Vice Province) on this Blissfield event said that we thank God and admired the legacy of the saint, and the commitment of Dominicans in the world.

He also said that this Mascarella table is a “the table of fraternity, joy love and sharing of our faith,”. He further said that through this fraternity we friars of the Order are engaged in different ministries such as: itinerant preaching, parish ministry, teaching in schools, writings, catechetical formation, social work, the art work, internal administration of their institutes. To fulfill these ministries we live in community and develop our deep union with Christ through their community life.

While talking to AsiaNews Rev. Fr. Younus Shahzad, Dominican priest and provincial of Ibn-e-Mariam Vice Province of Pakistan in his comments had said that Dominican family of Pakistan celebrated 800 years of Dominican order and 450 years celebrated of Rosary which was given to the church. At the moment Order of Preacher is spread in 98 countries of the world, the Italian missionaries had come to Indo-Pak in 1931 after that in 1956 American had continued the mission and later in 1982 Ibn-e-Mariam Province was established.

Prior Vice Provincial Rev. Fr. Younas Shahzad also said that we have 50 Final Professed along with 32 Priests and one Permanent Deacon serving in Pakistan.

The Pakistani Dominican Fr. James Samuel OP (Local Superior of the Lahore Community and assistance Parish Priests at St. Luke’s Parish Shahdara, Lahore) said that the community of friars dedicated their lives to the preaching of the Eternal Word Jesus Christ, the Truth (Veritas) in different ways.

Historically it was 17th century that the Dominican Congregation of India, based in the Portuguese settlement at Goa, numbered about 350 brothers, but died out in the 19th century. The 20th century saw a revival of Dominican presence in both India and in what is now Pakistan.

In 1931 the Italian Dominicans of the Roman Province, led by Fr Benedict Francis Cialeo OP were invited to work in the Diocese of Lahore. In 1939, the Diocese of Multan was erected and Fr. Cialeo became its first bishop.

In 1956, the American Dominicans of the Province of St. Joseph began working with the Italian Dominicans in the Multan Diocese. In 1960 Multan was divided into the two dioceses of Multan and Faisalabad.

Bishop Cialeo went to Faisalabad and the American Dominicans took over Multan, with Bishop Louis Scheerer as the first American bishop in the Diocese of Multan.

In 1966, the first group of young men from Pakistan entered the Order. In that year a programme was established in Multan to train young men who wished to enter the Order.

In 1969, the Novitiate House was established in Bahawalpur, and later the house of studies was opened, attached to Christ the King National Seminary in Karachi. In 1973, the first Pakistani Dominicans were ordained priests.

From the beginning of the Order different groups of lay people worked as associates with the friars and nuns. This association grew into what we now call the Dominican Laity.

Lay Dominicans are a worldwide confraternity of the men and women of the Catholic Church who belong spiritually and canonically to the Order of Preachers.

They are called to preach in the secular world, in the families, in the marketplace, or wherever they work. The Sons of Ibn-e-Mariam Vice Province of Pakistan may grow more and more in the spirit of St. Dominic to work for the salvation of the souls.

Mr. Kashif Anthony is a researcher, Blogger and Freelancer, who authored many articles and reports on society and Minorities of Pakistan. He has a deep concern for educating and uplifting the Youth and loves to reach them by providing training to the trainers and speaking to others trough his Motivational speeches. you can reach him at : k.kcjp1985@gmail.com

Internet services to be restored in Pakistan soon: PTA