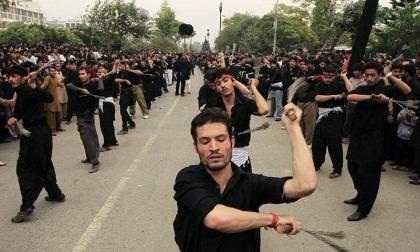 Muslims observed Youm-e-Ashura, Muharram 10, with due solemnity in remembrance of the martyrdom of Hazrat Imam Hussain (RA) amid tight security in Baldia Town district Keamari. Youm-e-Ashura 10 Muharram was observed all over Pakistan, as well as it was also observed in Saeedbad Baldia Town.

The residents from all over the town had visited the procession where different tazia was placed for the peoples, to remind them of the day of Ashura and the sacrifices given by the Hazart Imam Hussain (RA) with his family and followers to sacrificed their lives for the survival of Islam forever.

Moreover, in this regard to protect the procession and followers of Hazrat Imam Hussain the Station House Officer of Madina Colony Police, Salim Rind showed his splendor performance and he was also present at the procession of the Ashura with his police party from morning till the end to the procession. The security arrangement was tight to avoid any untoward incident during the mourning processions,

Speaking to Daily City News, SHO PS Madina Colony Salim Rind said that he and his soldiers are ready to monitor the procession and provide security till the end.