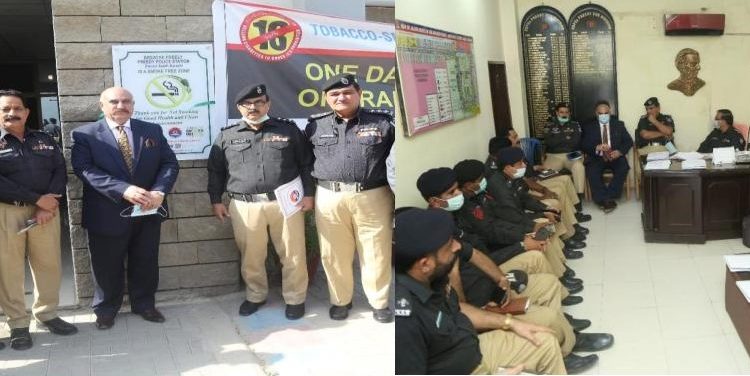 It was organized at the office of Deputy Superintendent of Police (DSP) Preedy South Karachi, while presiding the session Waqar Jadoon DSP Preedy welcomed the delegation of Tobacco Control Directorate and all the participants who came from different police stations.

Dr. Minhaj us Siraj Project Director Tobacco Control briefed participants regarding the tobacco control laws, working of directorate in Karachi including other districts of Pakistan and successful examples of tobacco control laws enforcement by the support of police department.

Speaking with the participants he stated that Nicotine is just as addictive as heroin, it is a natural pesticide which damage DNA of humans when they take it from cigarette smoking.

He also shed light on SROs which issued time to time in continuation of Tobacco Control law.

The chair of meeting DSP Waqar Jadoon appreciated the efforts of Tobacco Control Directorate and suggested for the mass awareness campaign regarding the said laws .

He added that Police cannot arrest citizens and specially youth in violation of tobacco control laws until they would aware about these laws.

SHO Arambagh Pawan Kumar said majority of people know the hazards of cigarette smoking but they are now addictive of it.

At last DSP Preedy along with police officials of Saddar Division Police Station and Tobacco Control Directorate delegation including Dr. Minhaj us Siraj, Project Manager Muhammad Aftab inaugurated the smoke free plate which has fixed at the main entrance of Preedy police station after which the police station has declared as a smoke free zone.

SJC expresses grief and anger over murder of Journalist

Workshop held on Democratic participation of minorities in Elections

Workshop held on Democratic participation of minorities in Elections